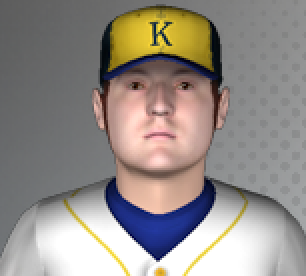 Kentucky sent 2 draft picks to the Spurs in return for designated hitter and first baseman Joe Eberle. Eberle is a 23 year old from Boynton Beach, Florida.

He was drafted in 2046 by the Spurs out of high school, and has spent the last five seasons in their minor league system.

Eberle is known for his foot speed and his ability to avoid the strikeout. He’s got a 7.3% strikeout rate in AAA San Antonio this season. His 163 OPS+ is third in the Explorer league.

Texas already has a strong designated hitter in Ed Ingram, so Eberle’s major league ready bat was blocked for the time being. Kentucky plans to use Eberle at first base and designated hitter. Gil Smith has played the lion’s share (ha!) of time at first this year, but his defense has been part of the problem for Kentucky.

Smith will move back behind the plate where he’s above average defensively, but Dermott Barke, who has performed well enough this season, will head down to AAA Louisville for the time being. Declan Fountain will move into the backup role and split time with Smith.

Eberle will make his debut at first base Sunday before the all-star break against the Alabama Yellowhammers. He’ll hit fifth in the lineup against starter Eric Rogers.